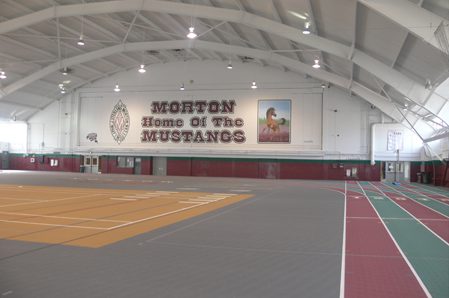 On June 23, 2010, torrential rainstorms hit the Chicago area, crippling many homes, businesses, and schools. Over 8” of rainfall in one hour was recorded in the towns of Berwyn and Cicero, causing short- term power outages that disabled pump stations at nearby schools and municipal buildings.

School District 201 was one of the hardest-hit entities, and both Morton High School East and Morton High School West suffered substantial Category 1 and 3 water intrusions from multiple entrances. Water poured into the buildings through doorways, roof leaks, and drains. Maintenance staff members were called in immediately to remove standing water and to begin the overwhelming task of restoring the field houses, stadium training areas, and over 275,000 SF of classrooms, hallways, gymnasiums, and locker rooms. Although the staff members did an excellent job of mitigating the damage, it became clear when mold appeared that professional restoration was incontrovertible.

A third-party administrator (TPA) called Platinum Restoration late in the afternoon of June 28, 2010, to inspect the damage and deliver a synopsis on the size of the loss. Our team analyzed the situation that evening and reported the loss as catastrophic. The TPA arranged a meeting with the school principals, director of school grounds, head janitors, and our large loss project management team the next morning. After a three-hour walk-through of both campuses, Platinum Restoration was contracted to perform the restoration. The district was covered by an all-risk policy, and it was our task to save whatever assets possible and make expert decisions on what could not be restored. The areas that were to be concentrated upon to restore were the Morton West girls’ gymnasium and the Morton East field house floor. Both had been impacted by water; however, they did not exhibit mold growth and could be saved with the right method of cleaning and drying. During this flooding, approximately 10% of the Morton East field house floor was only wetted and would be dried with ease.

Platinum Restoration immediately formed critical path management teams. The immediate threat to the West campus was a growing mold problem that existed on the wet carpet in its field house. This demanded urgent attention taking place simultaneously with cleaning crews working only during normal business hours. By this project’s completion, there would be a need for over 90 technicians, multiple supervisors, project managers, large-scale power distribution, desiccant drying systems, and portable dehumidifiers and air movers. Overtime was not authorized due to the district’s summer hours; however, the time to finish the project was expected to be accelerated.

Restoration teams, supplies, and cleaning equipment were procured, coordinated and delivered to the project by 7:00 a.m. Wednesday, June 30, 2010, and restoration began. Our first priority was to contain the areas of the school that were not affected by mold growth. The field house’s connection to the main school via adjoining locker rooms, hallways to classrooms, and an upper level gymnasium, would make these adjacent areas difficult to protect. The largest opening, 12’ from the floor of the field house, was approximately 108’ wide and 25’ tall. The glued-down carpet in the field house was laid over an asphalt bed that had been the school’s parking lot 25 years prior. Time, heat, and traffic made removal by conventional means impossible, and front-end loaders would later be used to remove the 48,000 SF of mold-impacted material. However, this could not begin until the area was under negative pressure and completely contained from the main school. Using spray adhesive and 4” duct tape on both sides, six-mil plastic was seamed together and then attached to the painted cinder block walls. The weight of the barrier required the support of 1” x 3” furring strips secured by 3” ramset nails around the entire perimeter of the opening. This task was performed by a two-man team on a 40’ articulating lift and supported by a two-man ground team.

The area was contained by Friday morning, and removal of the field house floor was scheduled for Tuesday, July 6, 2010. In addition to the critical containment barriers, negative pressure was achieved by utilizing the building’s inherent air movement and 5,000 CFM air handlers. Proper levels were easy to achieve but also created a concern that the largest barrier would be blown out due to its sheer size. Proper construction of the plastic seams was critically important. Our method was successful.

Other teams began moisture mapping, installing drying equipment, and cleaning the hallways, classrooms, and locker rooms. Additional affected areas were revealed every day, and with a holiday weekend approaching, identifying exactly what needed to be done the following week proved to be a challenge. Four areas were identified as remediation workspaces, and Carnow Conibear provided environmental consulting in the following weeks. These areas would be contained and dried with minimal disturbance until a protocol was established and remediation was authorized.

Removing the glued-down carpet in the Morton West Field house required two front-end loaders to scrape the material off the asphalt and two 8-man crews to carry the flooring to dumpsters and vacuum the entire area. This phase was completed in five working days, and by July 12, 2010, all areas on both campuses that were designated to be cleaned and dried were complete. The girls’ gymnasium moisture levels were brought down to acceptable levels and would be monitored for damage over the next few weeks, and the Morton East field house carpet was effectively dried, then cleaned, using conventional carpet cleaning methods.

On July 25, 2010, the Chicago area was once again slammed by more rainstorms, wetting both campuses again with mostly all Category 1 water. Most of the damage was now on the East campus, along with some in the Morton West stadium training areas. Due to cross-contamination of oil from the belowground boiler and pump room located directly under the stadium, over 35,000 gallons of water were pumped out into environmentally safe containers and hauled offsite for disposal. Over 30,000 gallons of rainwater were extracted from the peripheral areas on both campuses. Large-capacity desiccants and power distribution resources were scarce, and every resource available was prevailed upon to get the right equipment onsite immediately. Three companies were called to provide over 600KW worth of temporary power to support portable drying equipment and desiccant dehumidification. We now had the challenge of saving the glued- down carpet in the Morton East field house again (this time almost entirely saturated) as well as 80% of the hardwood flooring installed in the historic theatre of the same campus. Infrared cameras were used to map the wet materials; approximately 140 air movers were utilized to dry out the carpets. Ambient conditions after the storm had passed were optimum, and dehumidification control was not required, dramatically reducing the mitigation costs in this area. The carpet was dry within 72 hours. The theatre stage was tented, and dry air was introduced along with air movers to dry the floor at a pace that would not cause secondary drying damage. This task was achieved by August 6, 2010. All other areas affected by this storm were cleaned and dried within five days of the July 25th storm.

The next phase was to remediate the remaining workspaces caused by the June 23rd storm before school was back in session. Work began in the areas designated for mold remediation on August 10, 2010, and environmental experts cleared the areas on August 24th. Although project design challenges presented themselves along the way, this portion of the project was completed on time and with no significant difficulties.

Between the June 23rd storm and the July 25th storm, Platinum Restoration was successful in saving the Morton East field house floor twice, the Morton East stage floor, and the Morton West girls’ gymnasium floor, estimated at approximately $1.3 million in replacement costs. Mitigation charges were settled at $564,228, and the estimated total of the loss was publicly listed at $2 million.

This project was unique because there were so many different entry points spread over the campuses, both East and West. The stadium was 500 yards away from the Morton West campus, and Morton East over two miles away from both, making it logistically challenging to move crews and supplies as well as inspect each area in a timely manner. Additionally, many school programs were still in session, e.g., driver education, summer school, and athletics, and the presence of confused and curious students created additional challenges to manage. Classrooms for these programs were displaced, but getting the affected rooms restored for the new school season had to be the priority. All work required completion by August 27, 2010, with our teams completely offsite when students arrived for their first day of school.

Platinum Restoration saved School District 201 a substantial amount as a result of our expertise, innovative techniques, superior management, and hard work. Not only did we save the flooring valued at over $1.3 million dollars, we were able to save all of the schools’ desks, chairs, file cabinets, as well as nine of the wrestling mats valued at $20,000 apiece that were stored in the Morton East field house. We utilized the best restoration methods available, and with detailed and accurate billing practices, we kept our costs lower than our competitors who maintain higher overhead expenses. The TPA had retained a “clerk of the works” who was elated with the details of our estimates and lodged no requests for adjustments. Without precise restoration, the loss could well have exceeded $5,000,000 in damages and caused a severe disruption for the schools in 2010.